We’re proud to serve adults and families throughout the First State.  Contact us to learn more about our home- and community-based services.  We look forward to hearing from you! 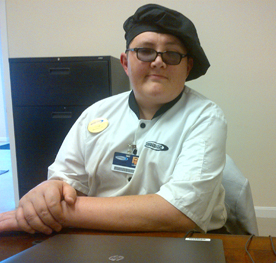 Grant smiles as he looks through baby pictures at the residence where he is supported by Delaware MENTOR. He recalls how he walked and talked by the time he was 11 months old, and lovingly refers to his grandfather as his best friend. At 15 months, Grant was following his grandfather inside for lunch one day when he was distracted by a truck that pulled into his driveway driven by a dear family friend. Grant ran toward it, but he doesn’t remember what happened next.

Grant, now 34, later learned from his family that one of the truck’s tires ran over his entire body. He tears up as he explains the next part of the story—how he was pronounced dead three times over the next 24 hours and that he fought with everything he had. Due to the accident, Grant had to fight through some tough times growing up. His experiences were much different than those of most children. He recalls being picked on and even being suicidal.

To those who are lucky enough to be part of Grant’s life now, it would be hard to imagine this young man as anything other than positive, happy, outgoing and loving, explains Nancy Beil, a Regional Director at Delaware MENTOR.

When asked how he became such a happy young man, Grant smiles and tells stories of beginning high school and making a friend who encouraged him to join the baseball and football teams. That was the first time in his life that he did not feel different than everyone else. He says he just fit in.

Grant is proud of his high school certificate and his many accomplishments in life. In addition to receiving residential support from Delaware MENTOR, he is enrolled in the culinary arts program at the Dover Downs Casino, where he receives vocational training.

Grant has come a very long way in the year that he has spent in Delaware MENTOR, says Nancy. He has achieved medication independence, made many new friends, and spends time with his girlfriend. We are anxiously waiting to be a part of what we are sure will be many more accomplishments in the future.